Meat and beer... mmm what a wonderful combination. Dan, Karin and I thought there was no better way to start the weekend than with meat and beer. Now where can someone get crackling and 100s of beer options? Josie Bones of course. Hidden among the many restaurants, cafes, bars and retail outlets along Smith Street in Collingwood, Josie Bones can be identified by its unmistakable pig trotter door knobs. 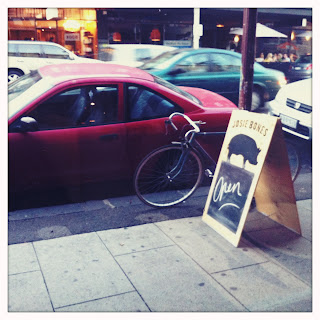 As there is a no bookings policy for groups less than 8, we had to rock up and hope the wait wasn't long. Luckily, we didn't have to wait at all. We were propped up against the window looking out onto Smith St and handed a lengthy beer menu. A beer bible.

Befitting of its location in Collingwood, there is a definite industrial feel inside. Wood, brick, darkness. And a picture of semi-erotic skinned rabbit positioned behind the bar reminds everyone what Josie Bones' culinary focus is all about - meat. 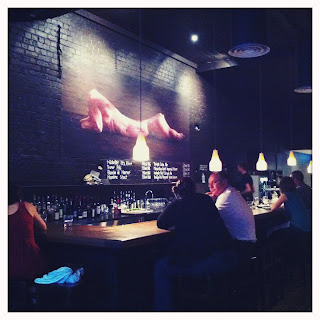 But we couldn't think about meat yet... it was a stinking hot evening. So we jumped at the opportunity to order a beer as soon as possible. With such a lengthy beer list, how on earth does someone choose just one of the many, many beers available? 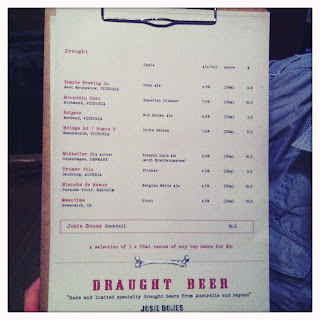 I started with my favourite type of beer - Pilsner - so that made my decision easier, but felt lazy and safe. Dan being a tad more adventurous and having never visited Josie Bones before, went with the beer tasting option and selected three of the beers on tap. Karin went with a Moo Brew, also a safe option. 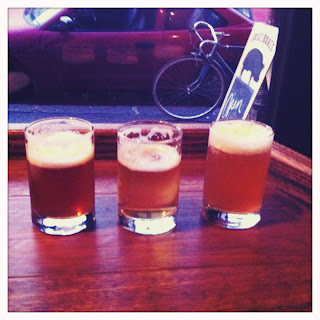 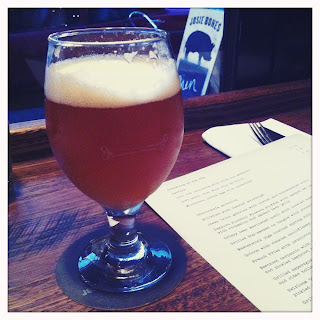 Relief. With beers in hand, we turned our attention to the food menu and ordered an assortment of dishes to satisfy our bellies and entertain our imaginations. 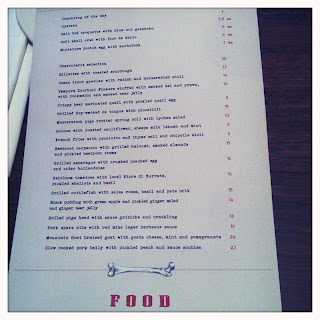 You can't go to Josie Bones without ordering some crackling. It would be like going to Josie Bones and not ordering beer. You must do both... seriously. The type of crackling on offer varies from night to night and that night it was pork crackling, which got us all pretty excited. Unfortunately, what we actually ate was a lot harder and tougher than we were expecting. In fact there were times when genuinely feared for the state of our teeth. Thankfully, there were a couple softer pieces. 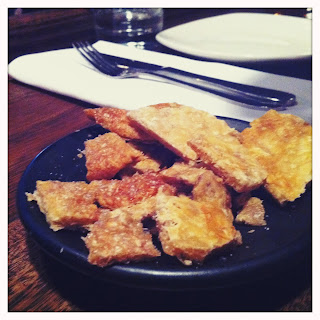 Next up was the Rillettes with sourdough toast. The rillettes was made with a combination of fish and was absolutely amazing. It was by far the more surprising dish of the night and we demolished every morsel. 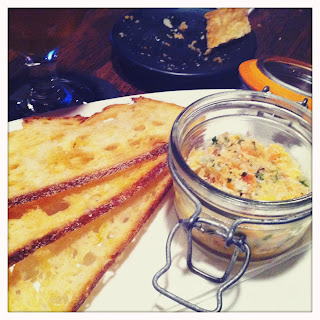 For those of you that don't know, Josie Bones is owned by Chris Badenoch and Julia Jenkins of Masterchef fame. During his time on the show, it was very clear that Chris had a penchant for nose to tail cooking and beer, which is the eminent theme at Josie Bones. And who was bringing our food out to us? Chris Badenoch himself.

And the next dish he delivered - a Miniature scotch egg with anchoiade for Dan. It was something I'd felt he needed to try, something very outside his current experiences with food. And I was right, he described it as "something different, that's for sure". But also said "I'd never try make it myself, you know, if I could". So probably not the best dish to pick flavour-wise (and it looks pretty unappealing when cut in half). 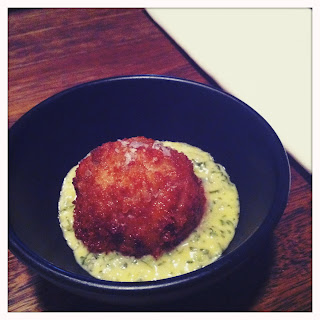 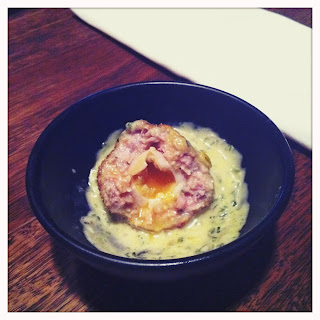 It was an inconsistent start but weren't deterred. Karin and I had been here a few times before and loved it, so we remained optimistic. (And the next few dishes didn't let us down.) 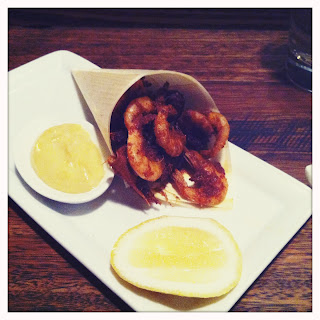 As one of the specials, we weren't sure what to expect when we ordered the School prawns. What we tasted was crispy, smokey and delicious. Paired with aioili, the prawns were fantastic and would make a great snack for anyone just stopping in for a beer and a quick bite. And more beer was just what we needed. 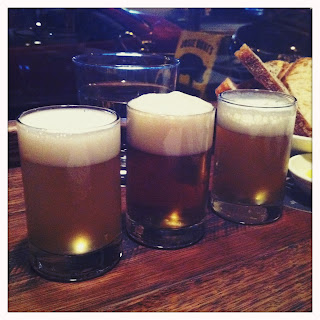 This time I ordered the beer tasting, Dan stuck with one of the beers from his original trio (Mikkeller Trappist Style Ale) and Karin went for the aptly named 'Trashy Blonde'. 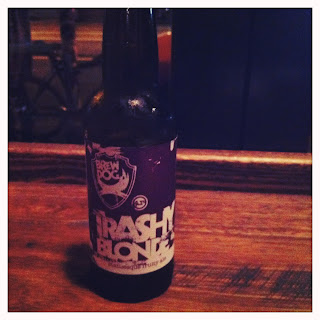 Having both enjoyed the Pigs trotter spring rolls in our previous visits, Karin and I were pleasantly surprised to see a new variation on the menu. Masterstock pigs trotter spring roll with lychee salad was amazing. Once again probably my favourite meal on offer at Josie Bones. The meat in the spring roll was wonderfully tender and hints of cinnamon and spices added flavours that stimulate every tastebud. Combined with the lychee salad and 'mousse', the vast array of textures and flavours joined together with complete synchronicity. Yum! 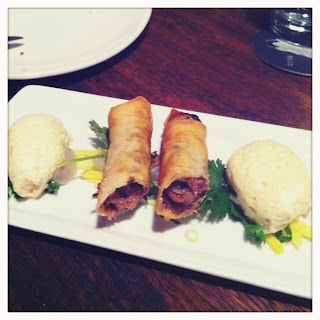 By now we were starting to think we had ordered too much. There was more to come. But one nibble of the Quinoa with roasted cauliflower, sheeps milk labneh and mint hooked me and knew I wanted more. It was far smoother than I was expecting. All the ingredients were jumbled together so you had a taste of everything with each mouthful. It was rich and delicious. Even people who usually don't like cauliflower will like this. 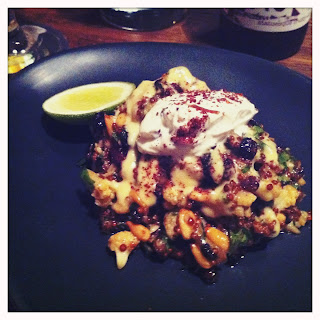 And the last dish was Dan's favourite - Mountain Goat braised goat with goats cheese, mint and pomegranate. Such succulent, juicy, tender meat, which was complimented beautifully by the soft and creamy goats cheese. It melted in our mouths, well mostly in Dan's. 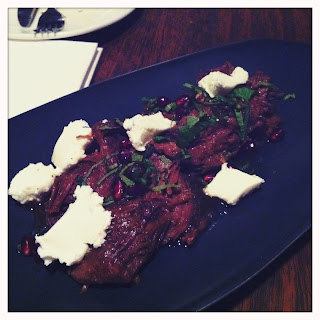 By this stage, a friend of Dan's had joined us and the boys decided it was time to up the ante with the beer menu. So they pulled out the big guns and ordered Tokyo by Brew Dog, a jasmine and cranberry infused stout. 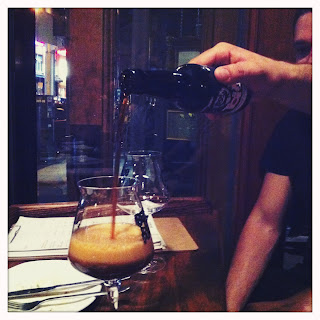 To our surprise two glasses, much like wine glasses, were placed before them. "So you like stout?" the waiter said. Ha! The guys had never had stout before and boy were they shocked. Providing no end of entertainment for myself and Karin, the guys whined and moaned about their beer but at $32 a bottle, they kept on drinking.

And so our dinner ended with a lot of laughs and full bellies - it was the perfect way to get us pumped for the weekend. 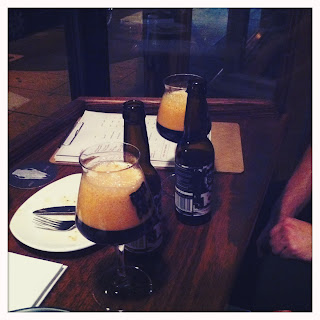 Josie Bones is fantastic for fans of beer and meat, and for anyone interested in trying something different. I would also recommend it as a date location. The suggestive wall feature, array of beers and dishes designed for sharing provide plenty of 'get to know you' opportunities. Either way, get there with an empty stomach and a few friends - so you can try a bit of everything. 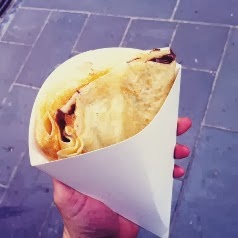